I expect most of us have heard of Nuremberg because of the trials of the Nazis after World war 2. At least thats the only thing I knew. However, this town, according to myth was first mentioned a thousand years ago when a wood worker fell in love with a nobles daughter.

Everywhere you go in this re constructed medieval town there a story legend myth of some wondrous feat. The Knight Eppelien, an adventurer and robber was finally caught and sentenced to death and according to tradition he was asked what he wanted as a final request and he said to ride his horse. On mounting his horse , legend has it that he jumped over the guards and the castle walls and escaped leaving the horses print on the castle walls.

Nuremberg was heavily bombed during world war 2 but after 20 years of re-construction it was brought to its former glory. Lots of churches very pretty market squares and cafes with gorgeous little bridges to cross thriver, the historic part of the town is picture perfect pretty.

We spent a couple of days here. The first day just walking around the mainly pedestrianised area, and taking one of those tourist trains to take an overview. Well worth it I think

The next day we took a private walking tour for a couple of hours and I am glad we did as we got so much interesting info. Like how when Germany was divided amongst the allies into four parts, they were referred to as Vodka for the Russians, Whiskey for the English. Champagne for the french and Coke for the Americans,

Historically Nuremberg was an economic power house in the mid 15the century and it was here that the pencil as we know it was invented. Indeed most of the major cosmetic houses still have their pencil items made here.

Their sausages are really famous here being small and thin, allegedly because in the olden days at dusk all non residents had to leave the walled city and the only way they could eat was when intrepid sausage makers decided to re shape the sausage into small thin ones that could go through the key hole. At least that is one version. They are boiled or grilled  and served with an onion and vinegar sauce. the most famous place to eat them is Bracwursthause Turcher 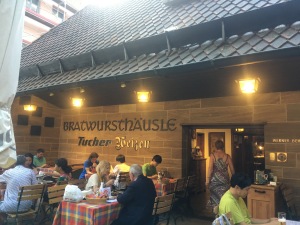 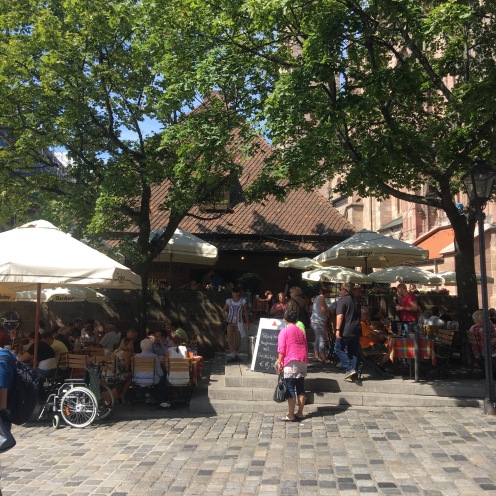 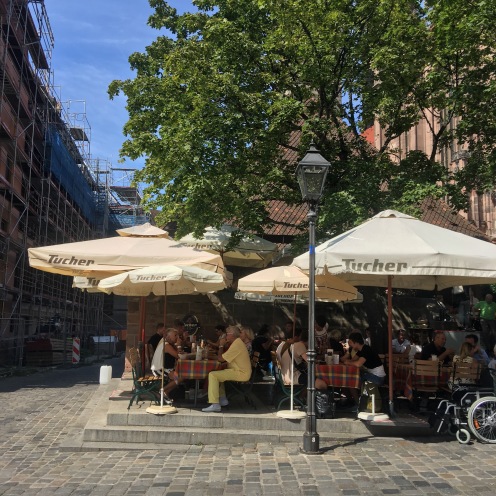 They are also very well known for a special type of ginger biscuit called ‘Elisen Lebkuchen’ and apparently the best is the tiny bakery we were taken to called Burg-Backerei & Lebkuchnerei’.

Also Nuremberg has the largest toy fair in the world. The whole place has just so much charm as well as history. 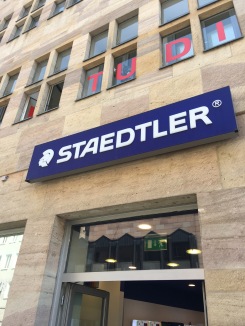